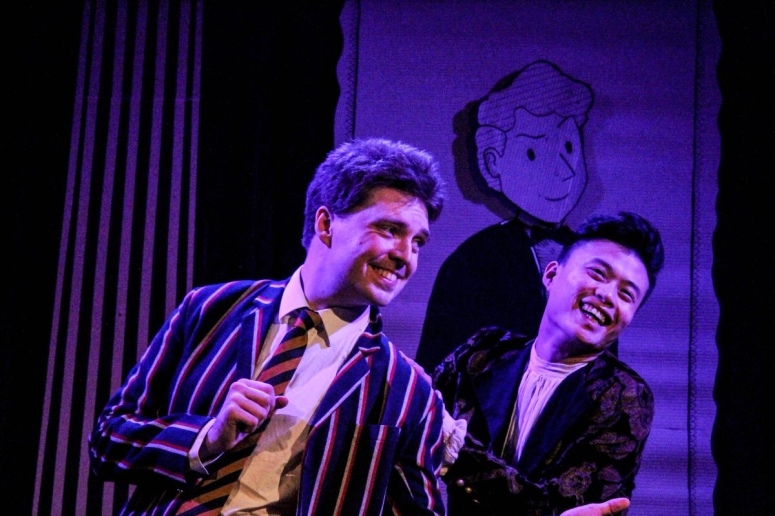 The play follows Eddie Spangler (Alborough himself) and his loyal valet Jeffrey as they attempt to ensure that Lord Lord Wiggins marries Emily Rhodes and inherits Rhodesia so that Spangler can get tax breaks on his Rhodesian opium plantations. However Lord Lord Wiggins’s jealous brother Lord Biggins Wiggins is determined to do away with his brother after their father skipped over him (the elder brother) and bequeathed the family mansion to the younger brother in his will. Or something like that. To be honest it doesn’t matter. What matters in an out and out comedy like this is the quality of the gags and the performance and what a treat they are.

Alborough’s script it tight and witty with the laughs coming thick and fast from the first second. It is intelligent yet farcical, irreverent yet piercingly satirical, with finely drawn characters and hilarious one liners, it was a treat to see something so finely honed performed with such gusto.

Alborough’s performance is an effortless mix of charm and ignorance reminiscent of Hugh Laurie’s Bertie Wooster combined with the crazy flamboyance of Kenny Everett. As his valet Jeffrey Eoin McAndrew is the perfect straight man, droll and knowing – possibly the most intelligent character to grace the stage, pulling the strings from behind the scenes. It’s a wonderful turn from McAndrew, all eye rolls and perfectly delivered put downs that fly over the head of his unaware employer. As Lord Lord Wiggins Aidan Cheng is overtly flamboyant and side splittingly plummy, brilliantly parodying the in-bred upper classes of days past, his multi rolling is also exceptionally strong, soliciting tears of laughter with his waddling Yorkshire policeman. If the effortless performances of Alborough, McAndrew and Cheng are almost plucked from the witty work of Fry and Laurie then Edward Spence’s Lord Biggins Wiggins is from a different stable of comedy altogether. Less Jeeves and Wooster and more The Young Ones, shouting, posturing and stomping around the stage, his attempt at Machiavellian villain, although soliciting a number of laughs, jars a little with the style of the other performances. Having said that, his scene stealing role as Wiggin’s old mother sharing a bed with Spangler and Jeffrey is a delight.

Olivia Rose Deane and Francesca Leone’s set is the most imaginative use of cardboard you’re ever likely to see. With all of the props drawn onto, and cut out of, reams of the stuff, it compliments the style of the show brilliantly and allows the ensemble to keep the pace up for the whole hour.

Benedict Phillip’s direction is creative and adventurous, drawing on the successful styles of the multiple genres on display while utilising the Hope’s thrust space fantastically. The swaying knees train scene is a real highlight.

The sound design is simple yet effective, adding to the story when required but the lighting was irritatingly simple and could have perhaps been used to better effect, especially early on while the tone of the piece is still being set.

Overall this is a brilliant hour of comedy theatre that will have you laughing from the first to the last and leave you humming the brilliant finale song all the way down Upper Street.

PS: for an additional treat make sure you buy a programme. Alborough’s programme notes had me crying with laughter before the house had even opened.